OT - where did the years go

OT - where did the years go

Seems like the years have passed so quickly since I joined this forum it's hard to put it all into perspective.
So many of the members I came to know and respect are no longer with us some having just shifted away from being active (like I have to a large extent) and some passing away. Gary L., Woody W., Ray Daughety, and so on. I took my son to Camp Geiger NC (part of Camp Lejeune) this week to begin phase 2 of his US Marines training (MCT - Marine Combat Training). He will be there for about a month then go to his first MOS (military occupational school) school. I passed near New Bern, NC and was saddened to think I could have finally met Ray Daughety face to face, but he passed on a few years ago.
This morning I was looking back through the pictures of my son and I enjoying the outdoors throughout the past 10 years (2009 - 2019) and put together a collage of some of the pictures. How recent it seems I began passing on my knowledge of the outdoors (hunting, fishing, camping) to him.
Did it have an impact? He told me while he was home on leave that in all actuality his success in making it through the crucible (a 52 hour final training exercise with 48 miles of hiking in full combat gear) and scoring expert in rifle qualification was as much or more because of what I had taught him than what the drill instructors showed him.
I would have to say it all has been great - passing on the skills and values my father passed on to me. My father was a simple man who loved the outdoors. He was a Pearl Harbor "survivor" (USS Tennessee) and served in the pacific theater throughout WWII. When the war ended he returned home, opened his own business (a blacksmith shop) and met and married my mother.
I joined the US Navy during the Vietnam conflict and ended up in the Mojave desert at a weapons testing facility (not exactly what I planned for when I joined the navy).
My son had always talked about joining the navy, but decided the US Marines had more to offer him in the way of education and benefits so he enlisted last summer (delayed entry program).
How different it is today when I try to enjoy fishing or hunting. I still enjoy it, but without him along it has lost a lot of it's appeal. I'm sure as he moves forward in his new career and gets more freedom and access to communicate with us here at home (like gets his cell phone back) it will become more enjoyable to me when I can share pictures and stories with him, but for now I'm still stuck in the rut of not being able to share my adventures with him as they unfold.
Sorry if I've bored anyone with my long story, but my point is - enjoy your time outdoors and share it with your children and friends, you never know what tomorrow holds for you or them!

The collage (he's the short one in front of the picture of his platoon 2025 in recruit training he gained weight in muscle, not height LOL)
and I would also add he received a meritorious promotion to PFC when he graduated and scored Expert (the highest) when he qualified on the rifle range (200-300-500 yards with a 5.56cal M16) 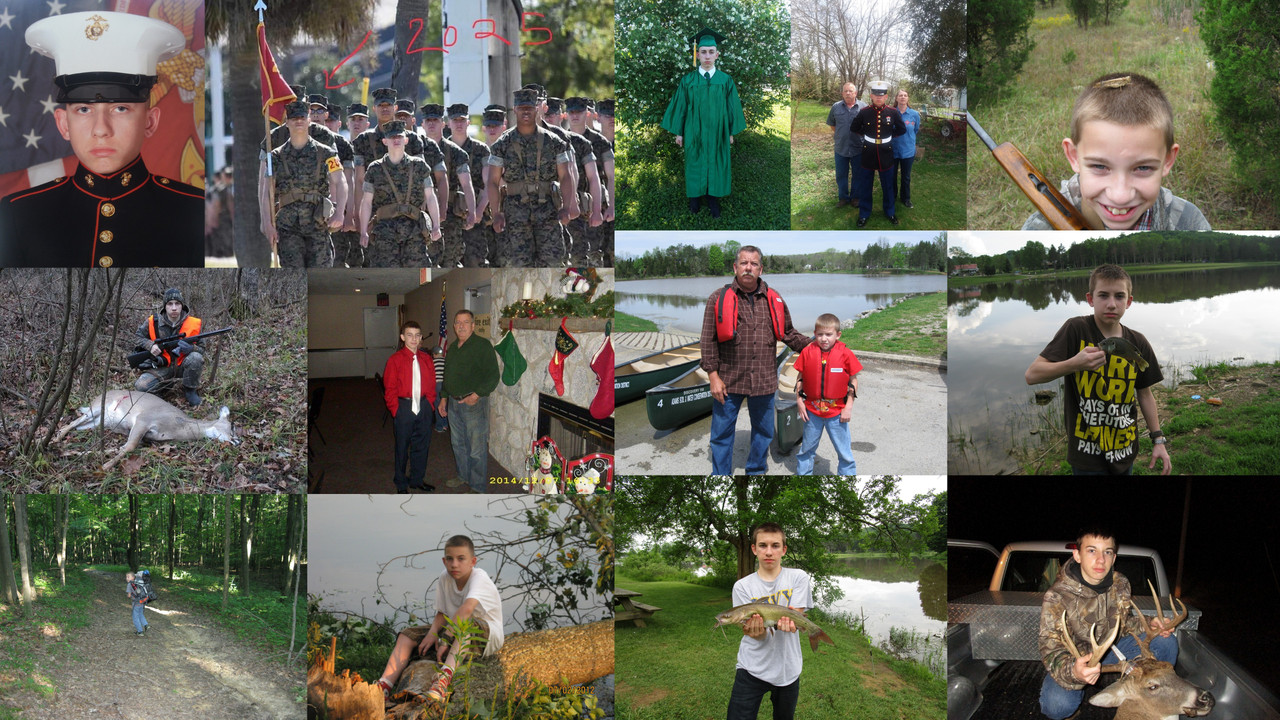 Good read Mike, thanks for sharing
I find myself currently sitting on the exact opposite end of the table with my 4 year old. Hoping like heck that he will open up and enjoy the outdoors like your boy did, and give me the same opportunity you had, and will have again on his return.
Micro-Hybrid-bulldog "PitBull370"
MOBU Micro BD345 "Greener"
Blackout BD-Axe "Hatchet340"

Well done Mike! Hopefully we all leave a footprint behind us.
If there are no dogs in heaven, I want to go where they went. Will Rogers
If I could love like a dog does, I would have a pure conscience.
Grief is the price we pay for love QE2
Top

Nice collage I like the shot with the grasshopper on his head, looks like you raised a fine young man, and the hunting life style he was brought up in will serve him well.
Hunt eat sleep repeat.
Top

FAR from "boring" Mike! Indeed a great write-up, and fantastic collage of pix to go with!

Never did have kids, just the way it worked out.
But I spend a good deal of time with a few that belong to my Buddy's, and love every minute of being their "Mentor".

You are absolutely correct. Who the hell is that old man staring back from the mirror these days?

And just where in heck did all those years go??

Keep at it Buddy. It is our love & pursuits that keep us Young!

Cheers!
Nog
"Political correctness is a doctrine, fostered by a delusional, illogical minority, and rabidly promoted by an unscrupulous mainstream media, which holds forth the proposition that it is entirely possible to pick up a turd by the clean end."
Top

Nice read, and great pics Mike. Too fast the years pass, but worth every minute. I had the two girls that chose not to hunt, but I spent a lot of time coaching them in softball. I did get to spend a number of years with my neighbor's son, and he is like a son to me. I all happens in a quick blink it seems, thanks for sharing with us all!
Matrix 330 - Doing Good in the Neighborhood!
Micro 355 (Jinx) Nikon Bolt XR. TT Single Stage Trigger KID'S now
Matrix 380 (Max) Redfield Revenge / TT Single Stage Trigger
Axe 340 Kryptek (Axe) Nikon P3
Top

I also have 2 girls they dont hunt but the one loves to fish.
There is always a daughters boyfriend/youngster in the neighborhood or from one of my accounts at work to take hunting or fishing .l love introducing someone new to the outdoor spirts. As a bonus if a boyfriend is not liked there's plenty of places to get rid of him in the outdoors....lol.
Micro 335 camo crossbones /matrix 330 nikon bolt /vixen ll / offspring with a micro stock crossbones/ matrix 355 with a micro stock crossbones/ metal ibex (adopted manco morto)/Phoenix/ trigger tec's /xacts/super freak ex's/ spitfires/zombies
Top

Awesome read! Thanks for bringing us in the loop.

Paul
You're only paranoid if everyone isn't out to get you.
Keep your friends close and your enemies closer.
My enemy's friend is also my enemy.
Top

Mike that is a wonderful write up on your fine son. I bet your proud of him giving service to our great country. There is no greater Honor that to serve our Nation. May he do well in all of his duties in the US Marines
Limb Breakin Half Bubble Off BD360
Marie Laveau MXB Charge Banshee MXB320
Awshucks Relayer 25
[email protected] 417-505-9315
Top

Congratulations! You’ve done a great job with the most important task you’ve had.
Top

Thanks for the replies and encouragement.

Vixenmaster, I couldn't be any prouder. So far he has exceeded my expectations by far! I was worried his small physical stature might be a problem for him, but he has done things I couldn't imagine (like "fireman carry" a 200lb fellow recruit a quarter mile during the crucible). I guess a huge desire to succeed makes up for a small stature. He went in struggling to make minimum weight (he's 5'4" tall and had to drink a gallon of water before weigh-in to make the 110lb minimum) but he put on about 15 lbs during recruit training.
The current Marine Combat Training he's in will be challenging, but I'm sure he can succeed. The worst part is the lack of communication with him. They don't get "mail call" every day, and I don't know when he will have time to write to us. Thankfully it's only 28 days of training, then he ships to his "A" school and hopefully will have a little more freedom to use his cell phone.
wabi
Top

Goes too fast. My little grandson somehow has turned into a young man seems like overnight! Guess I should say young grandson,little he aint 6ft 6in and 330 lbs.
Top

Wabi,
I totally understand all of this as my children get older and move out. Thank him for his service and the reminder that there are others around our military members that make sacrifices too.

Sounds like you have to be proud of how you have influenced your son and his values ! Thanks to your father, you and your now your son for their service !!
Top
Post Reply
20 posts